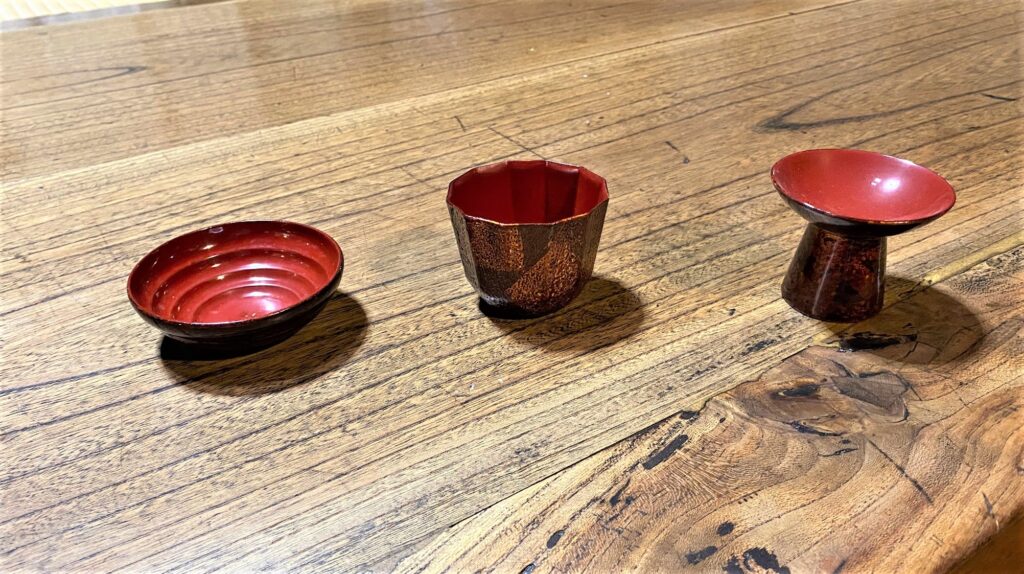 Taste with a sake set from Niigata

There are various types of sake sets, depending on the shape, size, and material.

Even with the same sake, the taste changes when the sake set changes.Choosing a sake set can be said to be one of the great pleasures of sake.

For example, those with a high scent are sake sets and wine glasses with the mouth facing outward, and you can fully enjoy the characteristic scent.There are many rules for choosing sake sets, such as the fact that old sake that has aged and has a color is loved by the glass and the white sake set inside.

Akiha Ward, Niigata City is producing the most recommended glassware for the coming season.Akiba GlassAnd in Kashiwazaki CityGlass Studio Craft You.

The sake set created by Mr. Koichi Terui, the representative of Akiba Glass, using the technique of blown glass feels warmth in a simple manner.1A point."Pale golden" which is an image of the autumn countryside of Niigata, which is a masterpiece(Awakogane)"Series" expresses rice ears with a subtle golden color.It is strange that when you pour it, various expressions are added to sake.The shadows projected on the table are also beautiful. 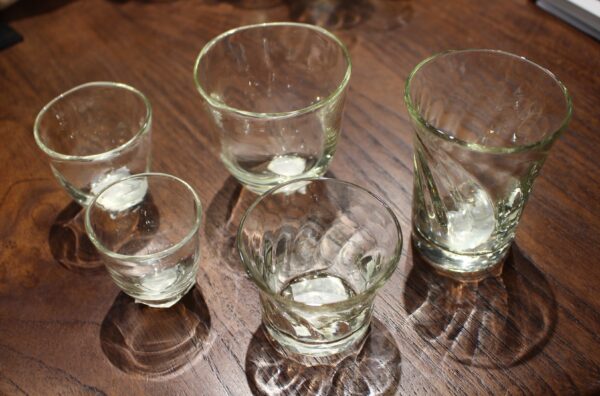 Akiba Glass's "Light Golden Series" (3 on the left) and "Ameiro Series" (2 on the right) featuring malls. 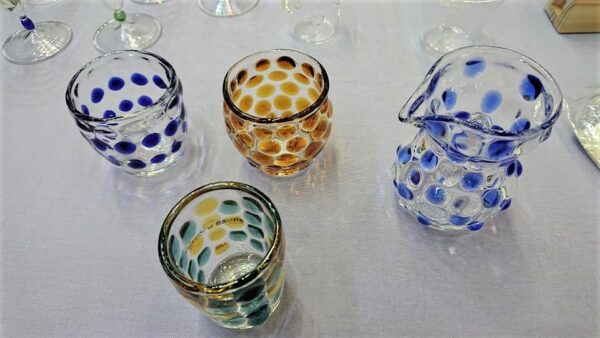 "Echigo Bi-Doro".Using a technique peculiar to heat-resistant glass, it has a beautiful appearance, a sharp mouthfeel, and functionality that can be used in microwave ovens and dishwashers.

Upper / Middle / Kaetsu, Sado.I would also like to pay attention to the traditional craft sake sets rooted in each region.It's perfect for special occasions or as a gift for your loved ones. 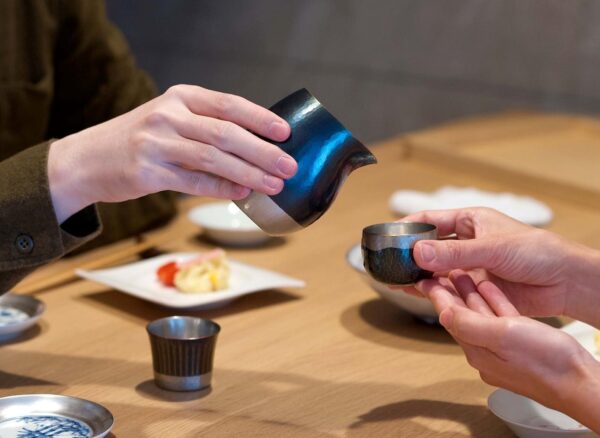 The photo is of Gyokusendo's sake set in Tsubame City.

In Sado, "Mumyoi ware", which uses the rare mumyoi ware collected from near the Sado Kinzan vein, is famous.Even now, there are about about Mumyoi ware on the island, including kilns that produce pottery that incorporates other soil, stones, and techniques.10There is a kiln. 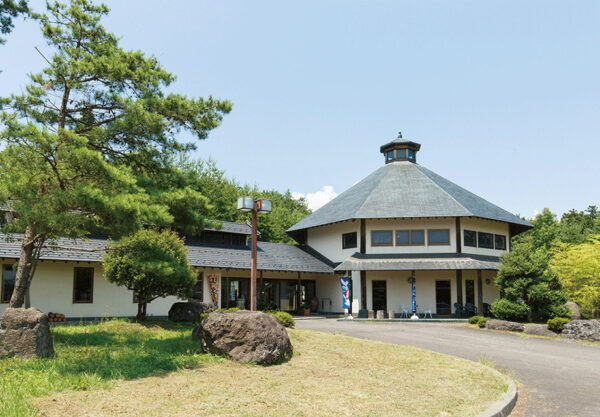 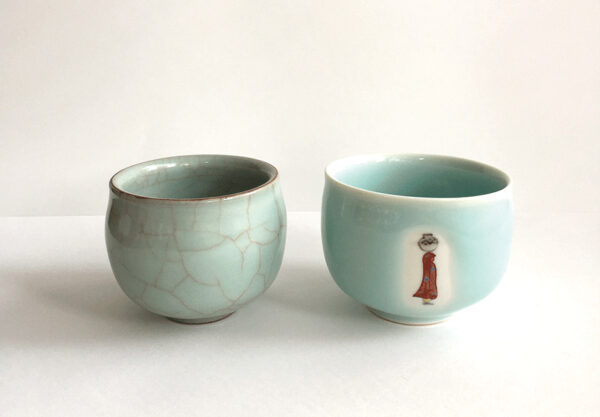 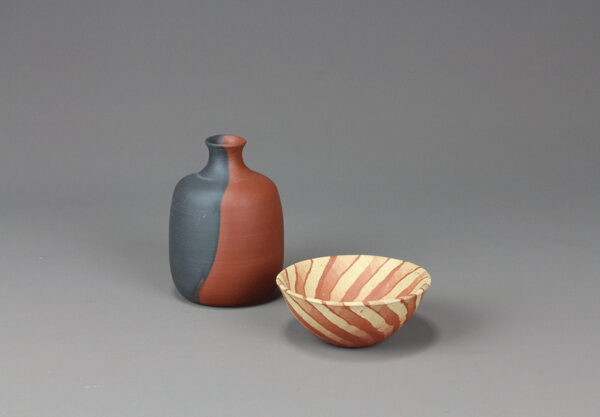 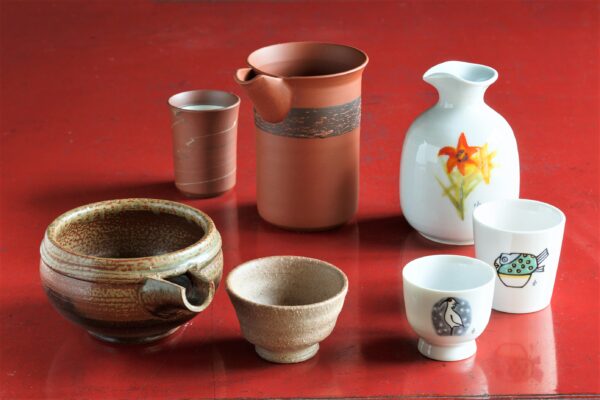 White porcelain on the right3Point) is "Sado Monogatari" by Kodaira Kiln of Miura Tsuneyama.After the death of Mr. Koheiji Miura, he inherited that spirit and printed a picture drawn by Mr. Koheiji when he traveled the world on white porcelain.The center (Kataguchi and cold sake cup) is Mumyoi ware of Nagayanagi Pottery on Aikawa Kyomachi-dori, which incorporates techniques such as snowstorms and kneading.Below (Kataguchi and Gui Roar) is a work of a wind kiln characterized by the gradation of baking and spraying methods that do not use glaze at all.The wind kiln is located on the grounds of Shukunegi, Shukunegi.

Find your favorite and make it a souvenir for your trip.

Murakami wood carvings are the traditional craft of Murakami City, a castle town on the border of Yamagata Prefecture.It started as a samurai job in the Edo period, was encouraged by the feudal lord, and then spread to the townspeople.The wood is carved and natural lacquer is applied many times to finish it. 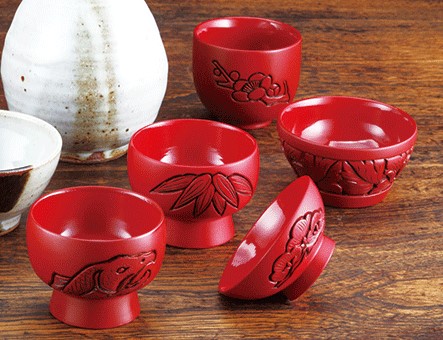 1826 (Bunsei9) At the Yoshikawa Sake Shop, which was founded in XNUMX, we sell sake sets by Kazuo Oda, a lacquer artist who works on "hontsu", which is made by stacking only lacquer without using wood. ing. 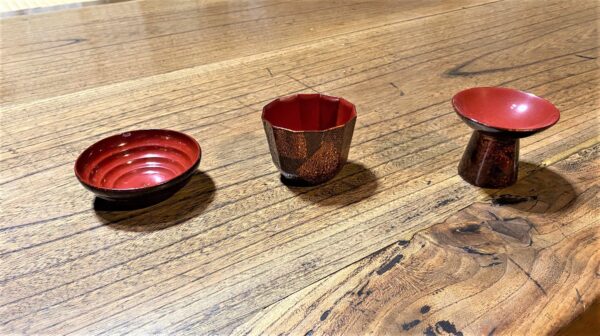 Tsubame hammered copperware has been produced in Tsubame City since the Edo period, and is made by hammering and squeezing a single copper sheet into a shape.

Founded in 1816, Gyokusen-do, the younger brother of the sixth generation head of the company, Tamagawa Nobuo, was designated a Living National Treasure in 2011, and Shimakura-do and Fuukido, both of which became independent after training at Gyokusen-do, produce and sell Tsubame hammered copperware sake cups, each with its own unique characteristics. 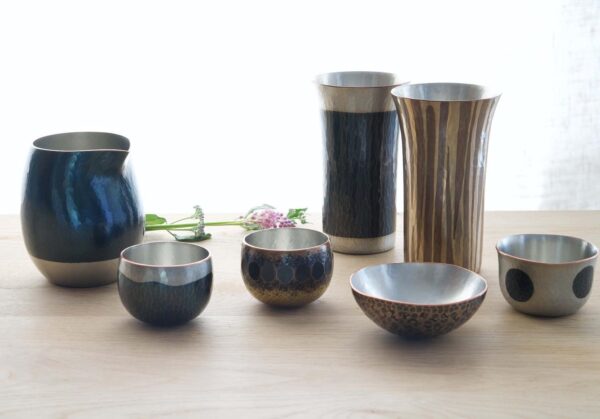 Gyokusendo's various sake sets.You can also tour the production site (5Reservation required for more than one person, closed on factory holidays such as Sundays and holidays).

Kashiwazaki City inherits the traditional technique of wax casting that has continued since the end of the Edo period.Soemon Hara KoboThere is.It is characterized by the mottled pattern that appears on the smooth surface when it is baked to the point of deformation. 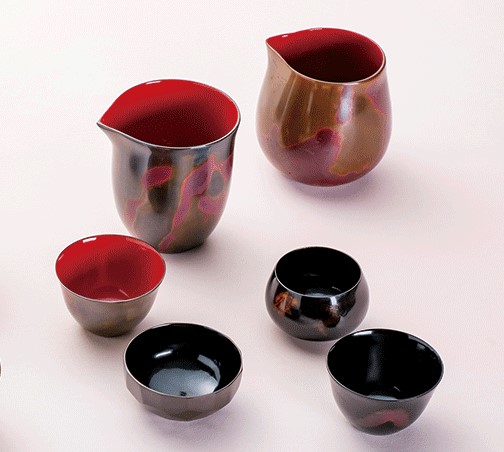 Hara Soemon Kobo's spotted purple same-sided mouth and sake set.In recent years, it has been highly evaluated from overseas, and it also produces sake sets in collaboration with overseas designers.

I would also like to pay attention to the unique sake sets of the artists who carefully make pottery in various parts of the prefecture. 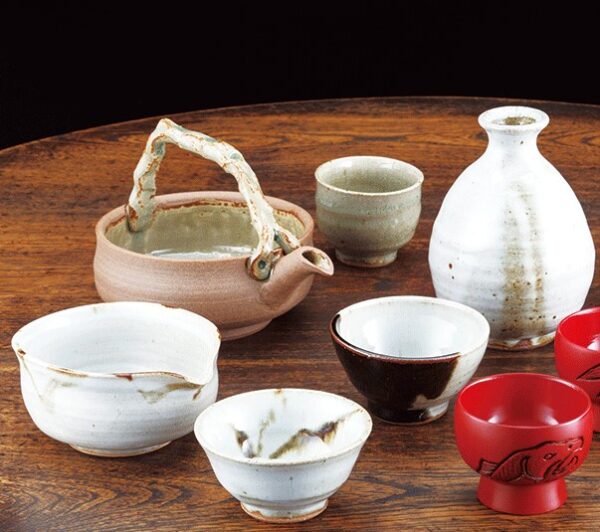 Bran white, which uses bran glaze made mainly from rice husk charcoal, is a masterpiece of pottery Yamaya sake set. 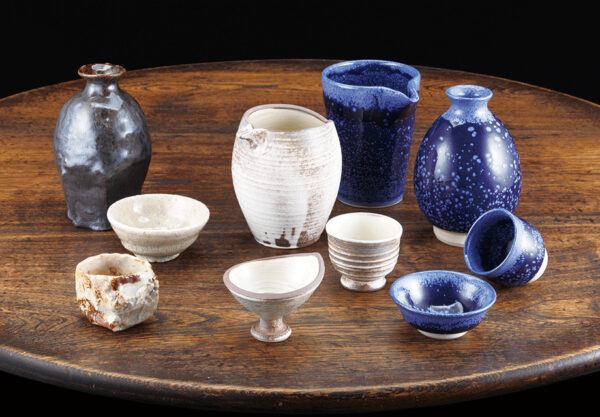 left3The points (gui only and sake bottle) areYouA work that conveys the expression of the soil in the workshop.Right side7The dots are the works of Sheep Kobo, and the blue sake set on the right is the galaxy Tenmoku glaze that imaged the starry sky. 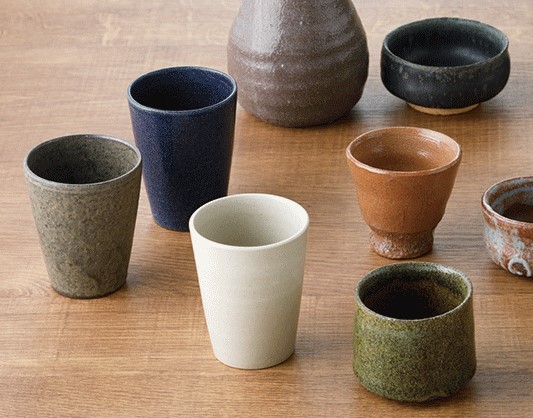 A work of Aoto kiln.There is also a glass of persimmon ash glaze using the ash of the persimmon tree cultivated in Akiha Ward.

There is an Otsuki kiln (Mr. Osamu Imanari) in the former Muikamachi in Minami Uonuma City, and an Agni Kobo (Mr. Eiichi Iguchi) in the former Shiozawa Town.You can feel the simplicity of the soil by touch and mouth. 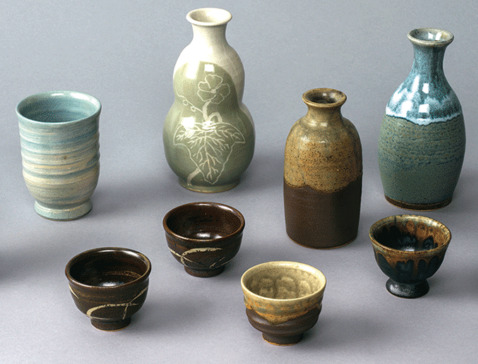 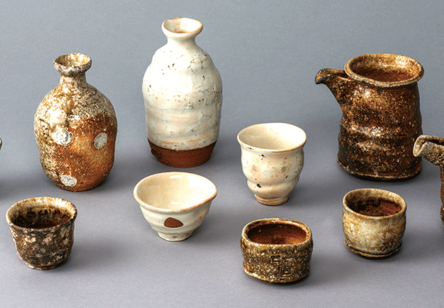 Mr. Iguchi who learned Bizen ware2001Agni Kobo opened in the year.Also handles firing by firing in a hole kiln.

In Kashiwazaki City1989Park Ishidobo (Mr. Hirokazu Sato), who opened the kiln in XNUMX,94Opened a workshop in the year2014There is a Myojo-yaki Tsunetomo kiln (Mr. Tsunetomo Katagiri) who built a handmade hole kiln in the year.

The photo on the left is a work by Park Ishidobo, who uses natural glaze to express individuality in the color change.On the right I used straw glazeMeijo-yaki constant flame kilnWork of. 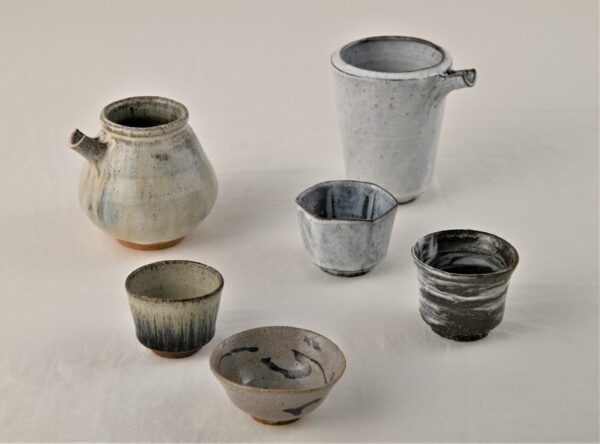 Echigo-yaki Myoko Akakura kiln sake set that makes the best use of the charm of the local soil and the texture of the climbing kiln. 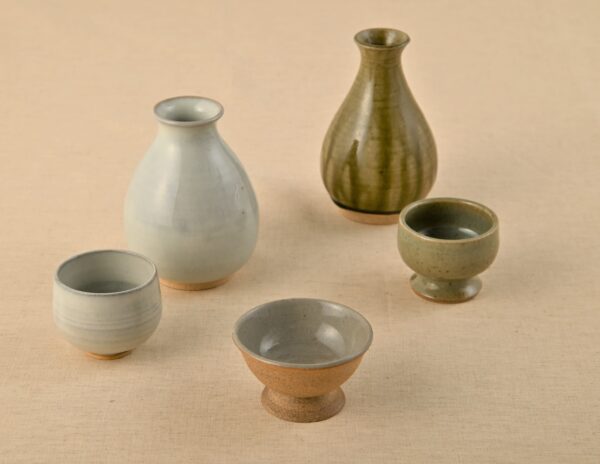 Ceramics Inn EpereSumiyama-yaki by the predecessor of.It is exhibited and sold at the inn.

Enjoy sake sets and local sake inside the station

In addition, we will sell products created by the craftsmanship of Niigata prefecture.Ponshukan Niigata 驛 storeNoponshukan Craftsmanship sells selected sake sets from all over the prefecture.Just looking at the sake set corner makes you feel like you are traveling in the prefecture. 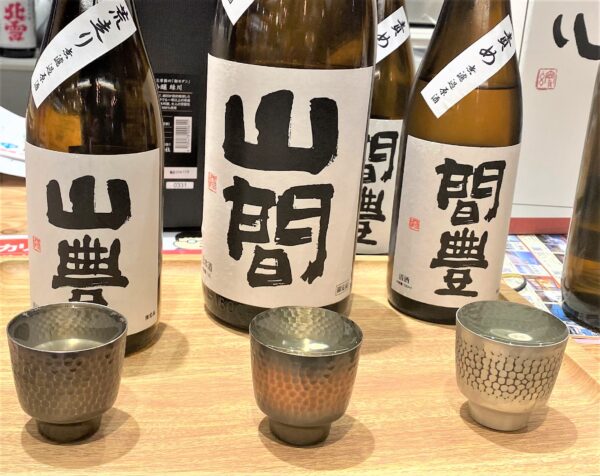 Adjacent to craftsmanshiptabibarThen, with these sake sets, you can taste premium local sake such as seasonal and limited quantity.

Sake set and local sake,2I want you to immerse yourself in Niigata sake with one story.