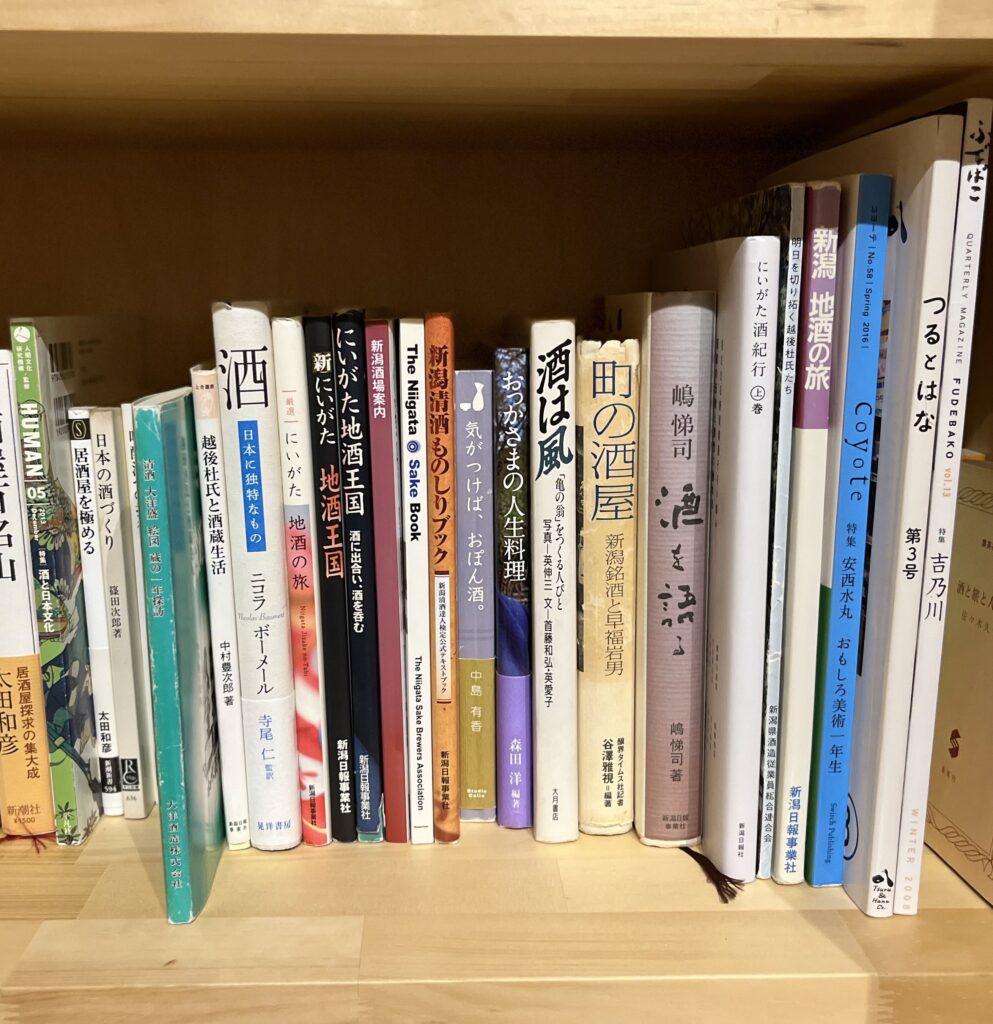 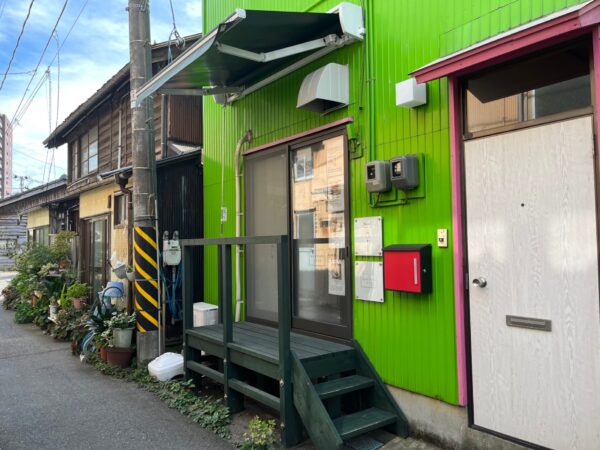 20216Month15Honmachi-dori, Niigata City1“Honma Bunko Niigata Food Library” opened in Bancho (near Hakusan Park).Dr. Nobuo Homma, a leading researcher of food culture in Niigata (91years old) collection1000It is a private library where you can read more than one volume, and we are in charge of its operation. 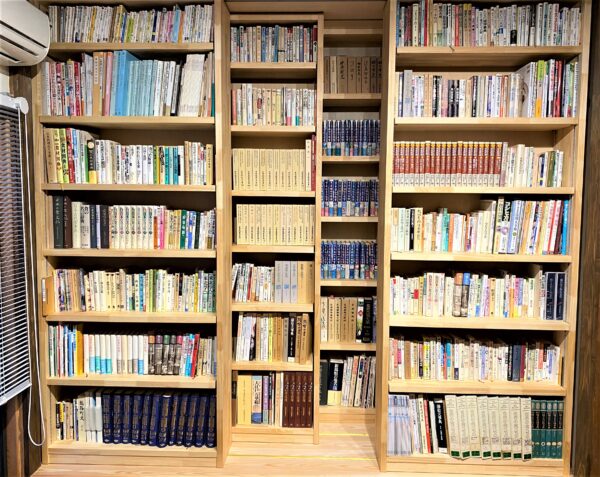 Homma-sensei's collection is lined up on three levels of movable bookshelves that have been refurbished from a closet.

"Food" also includes "sake", and we have created a corner for books on sake by adding our company's collection to Mr. Homma's collection. 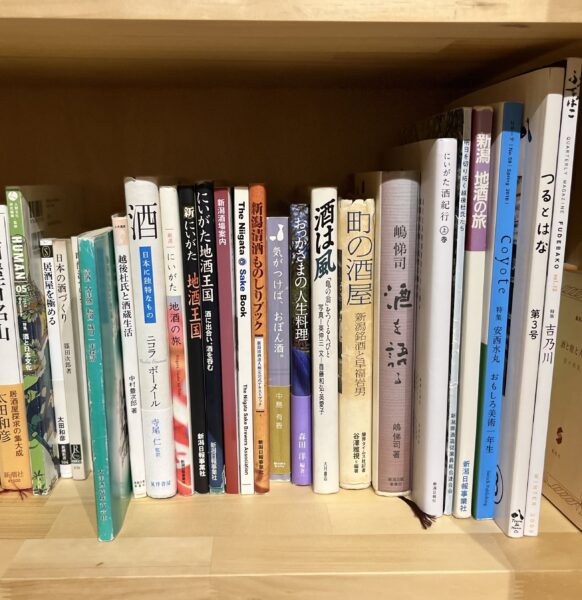 We will introduce books about Niigata sake that can be read at the Honma Bunko Niigata Food Library. 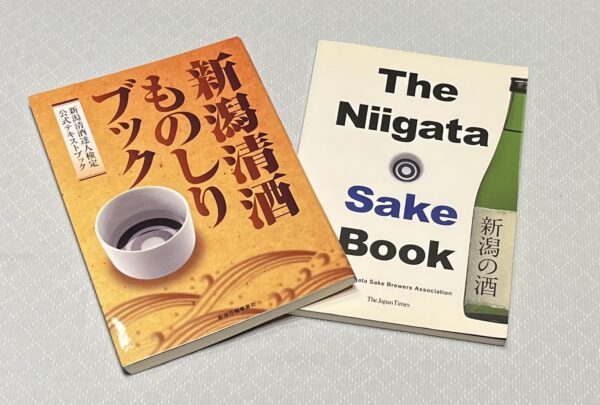 If you read through this text, you will definitely pass the master of Niigata sake copper.!?

This book is perfect for learning the basics of sake, not to mention Niigata sake.

From The Japan Times2009The English version published inThe Niigata SakeBook] There is also. 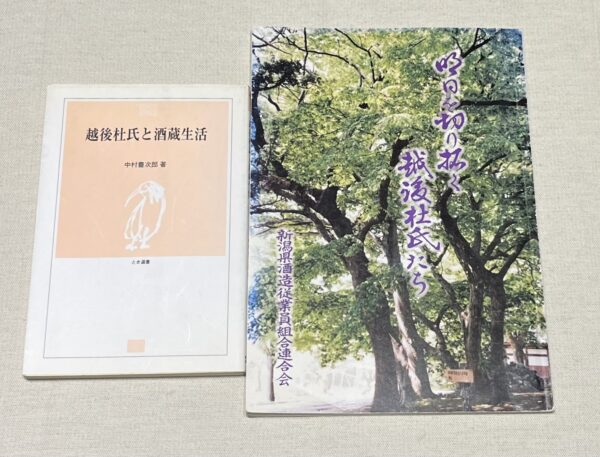 Echigo Toji has supported Niigata Sake.Showa30In the XNUMXs, Echigo Toji was1000Name, brewer (sake man)5000It is said that it boasted the largest number of people in Japan beyond its name.Currently, year-round employment has become mainstream, and the style of going out to work in groups has almost disappeared.That is why the records of Echigo Toji and Sakeodan Group, who have supported sake brewing in Niigata, are valuable.

Mr. Toyojiro Nakamura, a sake brewing historian who served as a high school teacher for many years,1999"Echigo Toji and Sake Brewery Life" (published by Niigata Nippo Jigyosya), which he wrote in XNUMX, presents the life of Echigo Toji in detail and realistically, conveying the thoughts of the toji and the origin of traditional sake brewing. can reconsider1It's a book.

The union organization of Echigo Toji, which was born in 1967, of the Niigata Sake Brewers Employee Union Federation35The anniversary booklet "Echigo Toji who will open up tomorrow" is a collection of newsletters up to that point.

It is easy to see how they have been working hard to improve their skills, such as holding workshops and holding competitions for each group of Echigo Toji in the prefecture, and the results of their efforts to pursue better sake.One of the charms of this booklet is that it touches on the family that supported the toji.

A bible for learning about Niigata sake 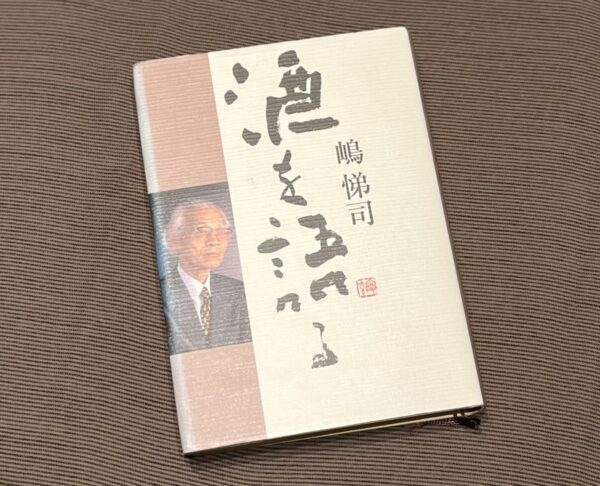 Teiji Shima, Director of the Niigata Prefectual Sake Research Institute, the first principal of the Niigata Sake School, and later involved in the development of Kubota at Asahi Shuzo Sake Brewing Co., Ltd.Mr. Shima, who is familiar not only with the sake brewing industry in the prefecture but also with people related to sake such as sake stores outside the prefecture as a "master of sake", wrote "Talking about sake" (2007published by Asahi Shuzo Sake Brewing Co., Ltd.).

With his broad vision and foresight, he has been a driving force behind ``Niigata Sake''.1Book.It is a bible-like book in which all the background of Niigata sake is written, and from every word, Shima's personality and passion for Niigata sake are conveyed.

Conveying the charm of Niigata sake through cooking 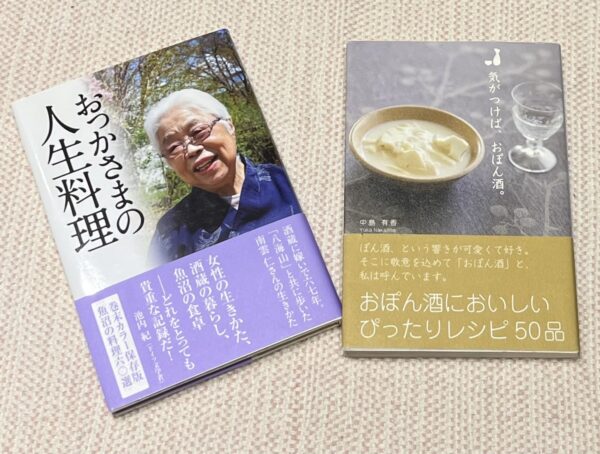 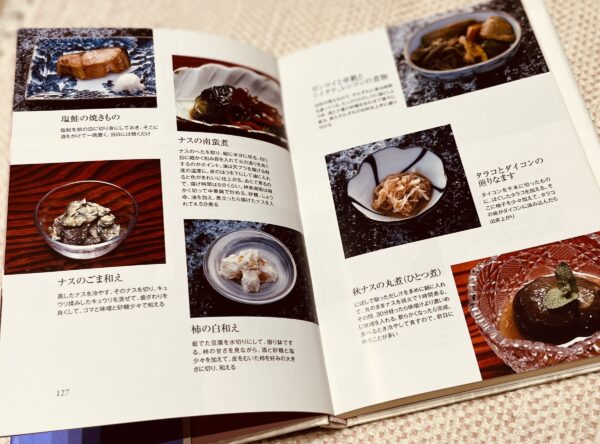 At the end of the book, "Mother's homemade dishes60Entitled "Selection", it introduces seasonal recipes and expresses gratitude for nature and thoughts on ingredients for each season.

Yuka Nakajima, a culinary researcher from Osaka who lives in Niigata City, published a recipe and essay that introduces Niigata's love for sake and dishes that make it even more delicious.2007Year,STUDIO CELLO). 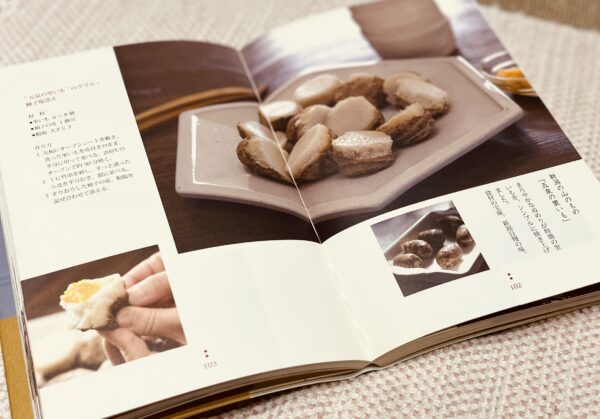 From sake breweries to drinkers 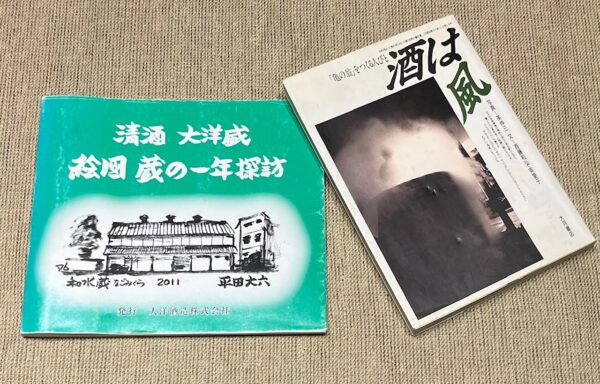 A book that introduces the story of the sake brewery is "People who make 'Kame no Okina': sake is the wind" (1991, published by Otsuki Shoten).We followed Kusumi Sake Product & Co., Ltd. in Nagaoka City, which was the model for the manga "Natsuko's Sake", from rice farming to sake brewing.1Book.

The photo is by Shinzo Hanabusa, and the text is by Kazuhiro Shuto and Aiko Hanabusa.about1For a year and a half, I followed up on the sake brewing of Kusumi Sake Product & Co.,Ltd. 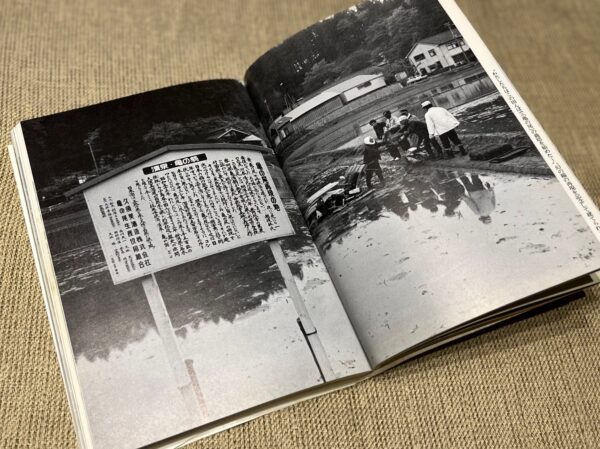 photo essay,1Pie1Looking at these photographs, it is no exaggeration to say that they are a collection of photographs.

Inside Niigata Station "TABI BARKenji Kubota, the navigator, introduces the sake of Kusumi Sake Product & Co., Ltd. to travelers with this book in one hand, and the book is in tatters……. "30The unwavering attitude of the brewery over the years is amazing," he said excitedly, adding, "Look at this picture. President Kusumi (Kenwa Kusumi) was in college. He's singing karaoke."treasured1I hope you enjoy it too.

There are also unique books made by sake breweries. 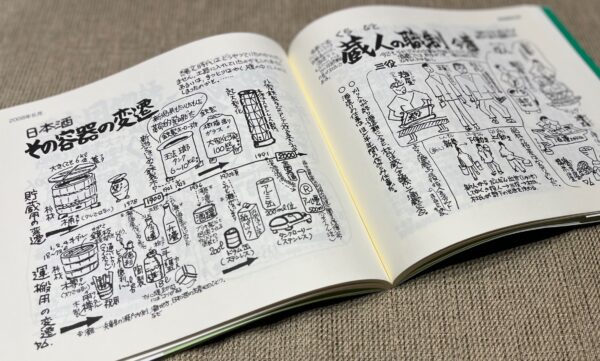 With illustrations and handwritten letters that only Mr. Hirata can draw, he introduces sake culture, sake brewing, and Niigata sake with humor.Recommended for Japanese sake beginners1It's a book.

The sake store is a great evangelist 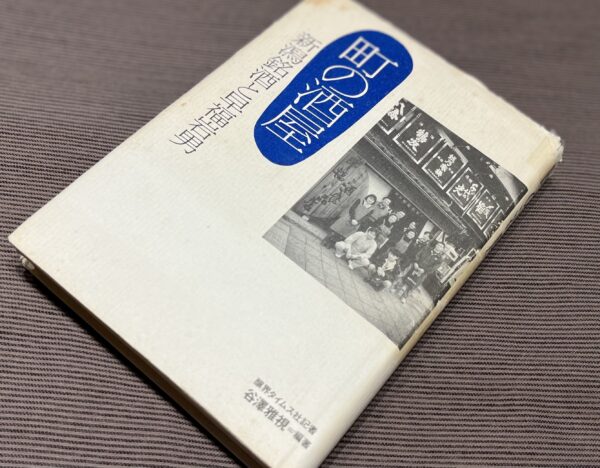 When I moved to Niigata, the first place I visited for research on Niigata sake was Sofuku Sake Food Store in Sekiya, Chuo Ward, Niigata City.Mr. Iwao Sofuku (current chairman) and Mrs. Sumiko Sofuku welcomed me with a smile and told me about Niigata sake.

There is no difficult story at all5He told us about the sake brewery that brews the brand.

"Town Liquor Store Niigata Sake and Sofuku Iwao" (1997XNUMX, Jokai Times) published the story of Iwao Sofuku, the unsung hero who spread Niigata sake nationwide, and comments from people in various industries who have been involved. It summarizes the philosophy of sake.Edited by Masami Tanizawa. 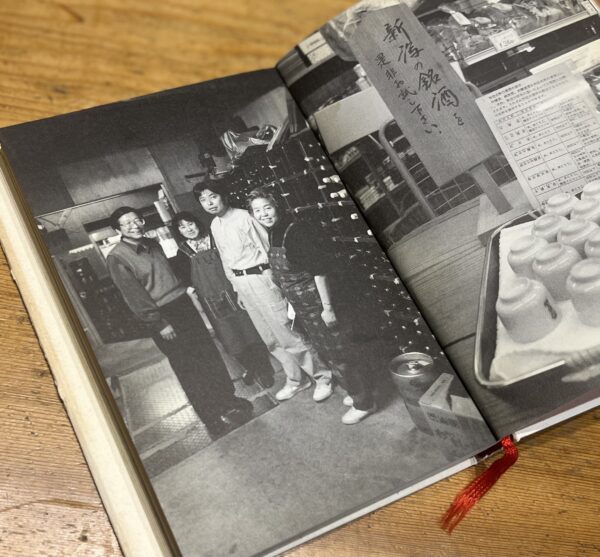 The warm smile of Sumiko, who supported Iwao for many years and died suddenly last year, is impressive. 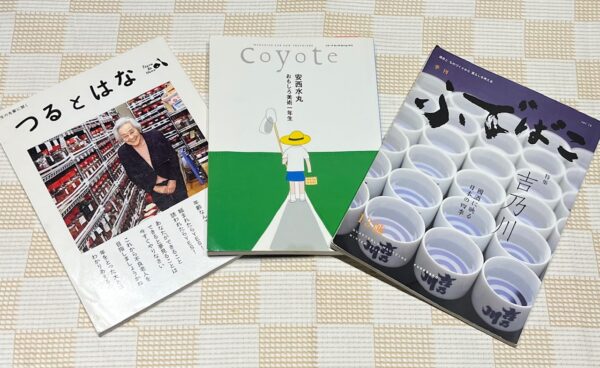 The library shelves are lined with magazines featuring special articles on sake breweries in Niigata.Magazines you want to keep as valuable materials3Introduce the book.

Quarterly Fudebako (Hakuhodo)2007winter issue (13issue) features Yoshinogawa. “Fudebako” is a magazine published by Hakuhodo, a brush manufacturer in Hiroshima Prefecture, that “thinks about life from tools and her craftsmanship.” 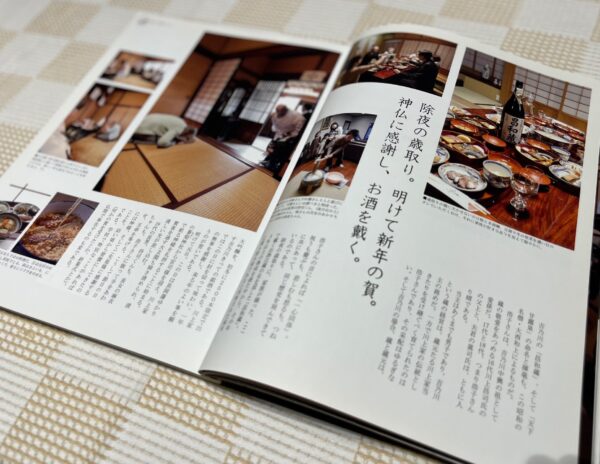 In "Special Feature Yoshinogawa: The Four Seasons of Japan Reflected in National Sake"86Across the pages, each season follows the work and life of each brewer and brewer, and introduces them with impressive photographs.

You can feel the traditional beauty of the sake brewery that inherits the local sake while staying close to the climate of Nagaoka. 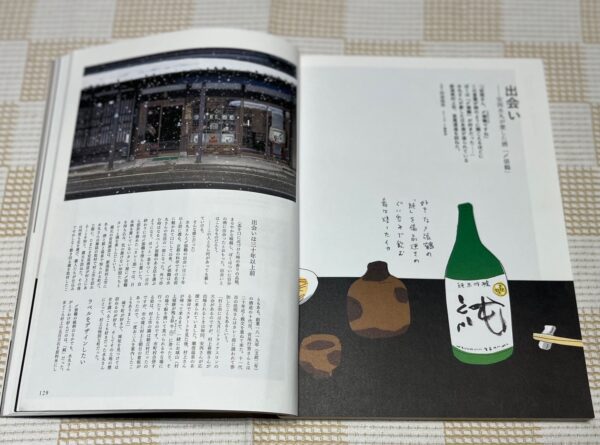 "coyote] (Published by Switch Publishing)2016new year,58issue.Murakami City's Miyao Sake Brewing Co., Ltd. was introduced in the special feature <Encounter Mizumaru Anzai's beloved sake "Shimeharitsuru"> in the memorial issue of Mr. Mizumaru Anzai, who was active as an illustrator, manga artist, and essayist.30It describes how Mr. Anzai drew an illustration of plum wine from their encounter more than a year ago. 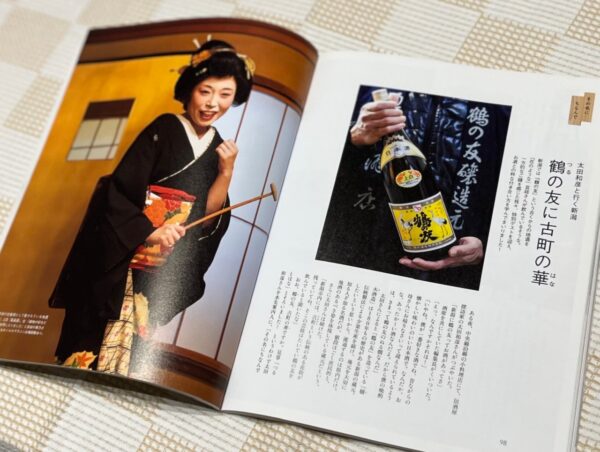 The situation is introduced in a travelogue written by a writer entitled "Furumachi no Hana in Tsuruno Tomo". 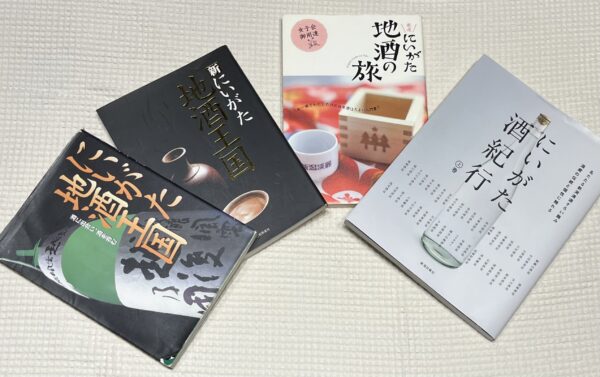 There are five Niigata sake brewery guides in the library.

From the five books published in different years, you can see the transition of local sake in the prefecture. 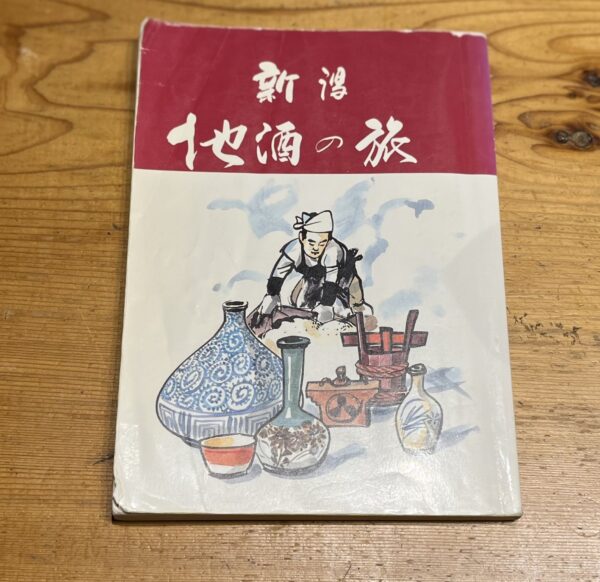 the oldest1992"Travel of Niigata Local Sake" published by Niigata Nippo Jigyosya in XNUMX.The article introduces72Although it is a storehouse, in the list of major brand labels at the end of the book107A warehouse is introduced.

"Niigata Jizake no Tabi" has a slogan of "purveyor to women's associations", and it can be seen that it has become a familiar presence for women.By the way, the number of sake breweries at this time was95It was a storehouse.

This year's Niigata Sake Travelogue, published by Niigata Nippo, is the first volume of the evening edition of the series Otona Plus.It is said that the second volume will be published after the entire collection is published.

"Sake" unraveled by the French 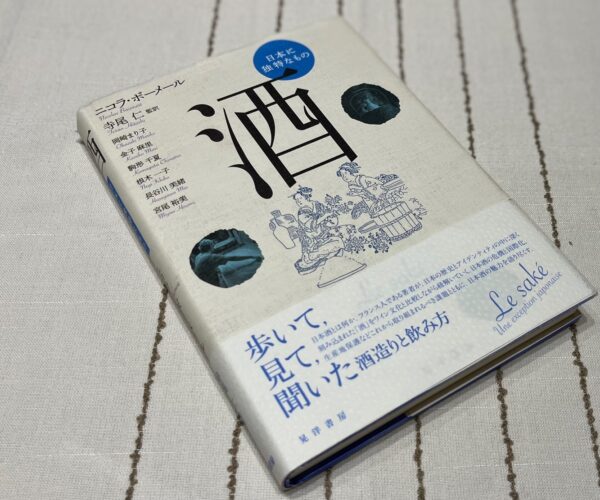 This year's5Nicolas Beaumer, a French doctor of geography and a professor at Nagoya University, is the author of Sake: Something Unique to Japan, which was translated into Japanese in May.

Considering sake (Japanese sake) as a unique thing completely different from wine culture, based on the perspective of geography and cultural anthropology, based on the knowledge obtained through a wide range of interviews, we will discuss how to make and drink sake, and the future of sake. also mentions.

The reason for picking up this book as a Niigata sake book is that the Japanese version was produced by the Niigata University Sakeology Center, the translation was supervised by Associate Professor Hitoshi Terao, a cooperating faculty member of the center, and the co-translation was done by many women who belonged to Niigata University and sake breweries. Body. “I definitely want women to read this book,” says Terao.It is also worth noting that the translated book from Niigata incorporates the perspective of a woman who holds the key to sake in the future.

Finally, I would like to introduce a book published by our company. 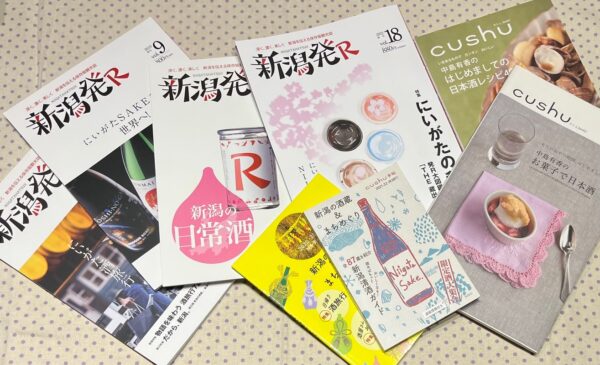 Every year in the spring issue of Niigata's sake, Niigata's sake is featured in the archived tourist magazine "Niigata Hatsu R", which conveys Niigata with depth, richness, and beauty. On October 10st, which is Sake Day, we are publishing a guidebook for all the sake breweries in the prefecture and a guidebook for sake trips.

There is also a recipe book by Yuka Nakajima, mentioned above, that goes well with sake.

We want you to learn about Niigata sake from library books, and explore various ways to enjoy sake in the coming season when you can't wait for new sake and miss hot sake.